Cure Our Animals - Cure Us 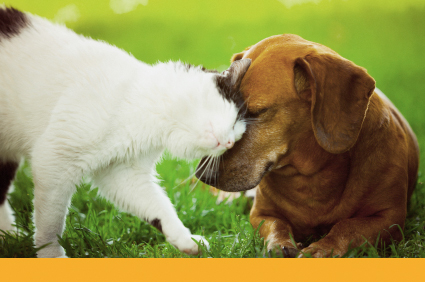 Traditionally cancer research is initially performed in laboratories using techniques such as tissue culture and implanted cancer cells in mice.  Then there is a huge leap to take the drugs developed in the laboratory into clinical trials in humans with cancer.  Did you know it takes on average 13 years to get a drug from the laboratory to human clinical use for cancer treatment?  It also costs an astonishing amount of money in the order of $1.3 billion.

Spontaneously developing diseases, such as cancer, in dogs and cats have long been studied to improve the understanding of similar diseases in humans. We call it translational oncology because the findings translate from one species to another.  This also speeds the translation of drugs discovered on the laboratory bench to the bedside of cancer patients. The results save millions of dollars and lives (pet and human lives) along the way. We can identify effective treatments quickly, fine tune the technology and help pets and people with cancer effectively reducing cost and development time.

Translational oncology is a rapidly growing field of study, with more training programs being developed each year. The translation works because companion animals share similar characteristics of physiology and metabolism for most organ systems and drugs. This allows better comparison of treatments such as surgery, radiation and chemotherapy.

Companion animals also share the human environment; therefore exposure to environmental contributors to carcinogenesis should be similar. For scientists, our faithful companions provide a lot of research benefits. First of all studies in companion animals can provide indications of therapeutic gain much more rapidly than can be done in humans. If strong evidence is obtained from naturally occurring tumours in companion animals treated with protocols similar to those in human trials, we can achieve more rapid acceptance of treatment modalities in human cancer.

Preclinical studies in companion animals can also help determine an optimal dose, sequence, and frequency of treatments with agents to be used in human clinical trials. Animal models can also help to identify factors that influence response to treatments and better define patient populations, which might benefit from a new treatment modality.

Of added benefit is that animal trials are generally much more economical to run than human trials. Professional services, clinical pathology, and diagnostic imaging, although of the highest quality, are of lower cost in comparison to those in human hospitals.

Sadly, there is no shortage of companion animals available for meaningful studies to be conducted. Almost half the deaths in pets over the age of 10 are due to malignancies and overall cancer is the leading cause of death in pet owned dogs. Companion animals have a higher incidence of certain cancers (such as osteosarcoma, non-Hodgkin's lymphoma, and soft tissue sarcoma) than humans, allowing even more cases to be studied.

Spontaneously developing diseases, such as cancer, in dogs and cats have long been studied to improve the understanding of similar diseases in humans.
We call it translational oncology because the findings translate from one species to another.

The following are examples of types of cancer that are of particular interest in translational research programs.

CANINE NON-HODGKIN'S LYMPHOMA (NHL)
NHL occurs commonly in dogs. It is a common spontaneous tumour similar to most human NHL and is very chemo-responsive. Canine NHL appears to be a relevant model for preclinical testing of new chemotherapeutics, immune system manipulation, monoclonal antibody technology, half body irradiation, bone marrow transplant technology and other modalities either for initial induction or rescue of multiple-drug resistance.
FELINE NHL
NHL is the most common malignancy in cats and is initially quite chemo-responsive. Historically, significant subsets of feline NHL were composed of T cells (CD3 positive) transformed by the retrovirus feline leukaemia virus (FeLV). The prevalence of NHL in cats, and its documented retroviral association, suggests that feline NHL may be a relevant model for HIV-associated lymphoma in humans.
CANINE OSTEOSARCOMA
Canine osteosarcoma is strikingly similar to osteosarcoma in humans. Osteosarcoma in dogs varies only in its age of onset (dogs are more frequently affected in middle age, whereas the peak age of onset in humans is 14 years), its high incidence (nearly ten times that in humans), and in its fast progression. Osteosarcoma is a highly aggressive bone tumour, with a 90% metastases rate following amputation of control of the primary tumour. Its predictable metastatic rate and pattern make this tumour particularly attractive as a model for anti-metastatic therapies. Canine osteosarcoma is a readily available and highly comparable spontaneously occurring cancer that can provide a better understanding of this disease in humans. It is also useful as a model for any solid tumour that is difficult to control locally.
HAEMANGIOSARCOMA (HSA)
Haemangiosarcoma is a highly metastatic spontaneous malignancy arising most often in the spleen and occurring more commonly in dogs than any other species. HSA is highly comparable to angiosarcoma in humans, and due to its high metastatic rate and vascular origin, has significant potential as a model for investigation of anti-metastatic therapies, in particular antiangiogenic treatments.
CANINE MELANOMA
Melanoma is seen commonly in dogs. Unlike melanoma in humans, canine melanoma is not associated with sun exposure, and most cases arise in the oral cavity. However, canine melanoma closely resembles human melanoma in biology and response to treatment, and can serve as an important translational model, especially for anti-metastatic therapies.
SQUAMOUS CELL CARCINOMA
The majority of oral cancers in humans are squamous cell carcinomas. Canine oral squamous cell carcinomas, especially in the gum, are excellent models for radiation therapy studies on this type of tumour.
NASAL CARCINOMA
Canine nasal tumours have a biological behaviour similar to human nasal and paranasal sinus tumours. They are also an excellent model for studying radiation therapy approaches. With regard to radiation therapy there is a great potential to provide information pertaining to the relationship of tumour oxygenation, tumour proliferation, tumour profusion, and methods to modify tumour hypoxia.
CANINE PROSTATE CANCER
Canine prostate cancer is a good model for advanced stage, hormone non-responsive prostate cancer in men. We have perfected surgical techniques for prostatectomy in selected dogs with prostate cancer. This has allowed us to provide a durable model for investigating this horrible problem for dogs and men with this type of disease.
CANINE BRAIN TUMOURS
Certain brain tumours in humans still remain extremely difficult to treat. The relatively high incidence of serious glial tumours (high-grade gliomas) in some breeds of dogs provides an opportunity to learn much about this significant problem in both species.

About The AACF
Cure Our Animals, Cure Us
Types of Cancer
Contact Us

Australian Animal Cancer Foundation is a not for profit research charity dedicated to fighting cancer and finding a cure for cancer. Our pets may hold the answers allowing cancer cures in people and our beloved pets. The goal is to find these answers.